Atelier in Gwangju kicked off: “The Atelier is about sharing ideas, knowledge, dreams”

On 31 August 2015 in Gwangju, South Korea at the Convention Hall of the Chonnam National University, the Atelier for Young Festival Managers of The Festival Academy (initiative of the European Festivals Association) kicked off. The opening ceremony was hosted by Professor InSul Kim. Jee Byung-moon, President of the Chonnam National University (CNU), and Jongman Choi, President of the Institute of Asian Culture Development, welcomed the 35 participants from 20 countries and 7 mentors to the second Atelier in Asia. Inge Ceustermans, Managing Director of The Festival Academy, introduced the Atelier, and Hugo De Greef set the tone for the discussions during the seven days to come based on his experience as General Coordinator of The Festival Academy and Mentor of the Atelier.

In his welcome speech, Jee Byung-moon referred to the role of festivals in our globalised world. He highlighted their importance for breaking barriers and promoting a spirit of community. Jongman Choi introduced the Asia Culture Center. He emphasised the role of Gwangju as a vital artistic city and invited the participants to make the most of their experience in the city.

Inge Ceustermans addressed the participants of the Gwangju Atelier: “The Atelier is first and foremost about sharing: sharing your ideas, knowledge, dreams, tastes, artists etc. It is a space to dream a better world and to reflect on the role art, culture and festivals can play in this context. You will learn a lot from the mentors, your colleague festival managers, the people from Gwangju. But: also think about what you can offer, what you have to give, what people can learn from you.” Read the full speech here.

Hugo De Greef has moderated each of the nine Atelier editions and looks back on a wealth of experiences in festival management. Based on this, he proposed the hot topics to be discussed during the working sessions, such as the responsibility of festivals towards their community as well as their engagement for contemporary artists, amongst many other issues.

The Atelier will close on Sunday, 6 September at 18:00 at the ACC Theater; Robyn Archer will give a closing lecture. Journalists and the public are invited to attend this public event: RSVP to Chamseul Kim at chamseul.kim@gmail.com or contact office@TheFestivalAcademy.eu by 5 September 2015. Have a look at the detailed 7-day programme and comprehensive press kit; interviews can be arranged throughout the week. 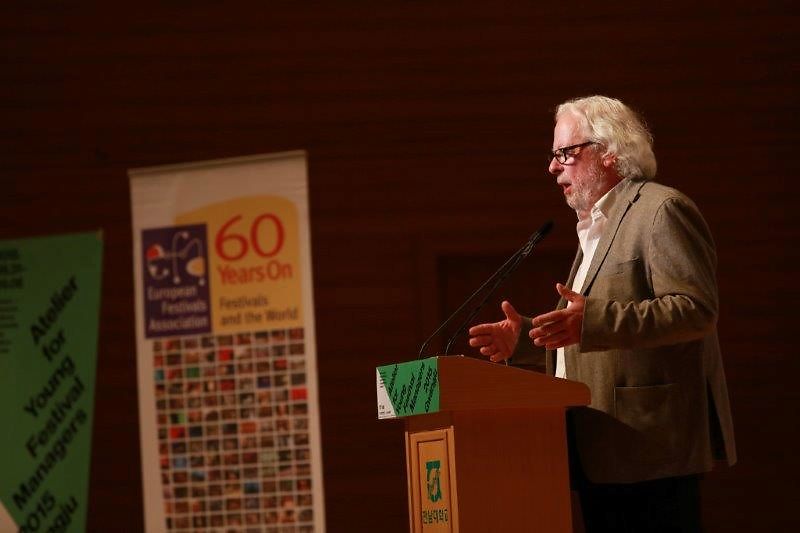