Highlights of Atelier Montreal in partnership with Festival TransAmériques 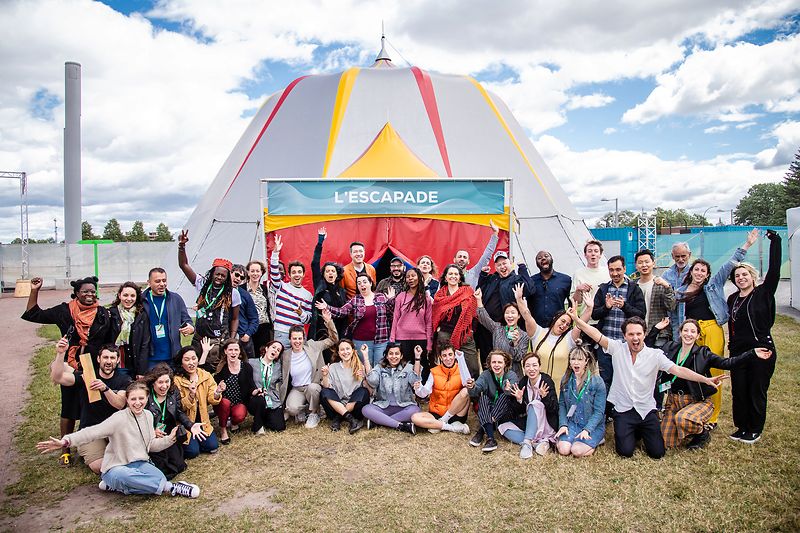 The 19th edition of the Atelier for Young Festival Managers took place from 1-7 June 2022 in Montreal, in partnership with Festival TransAmériques (FTA).

The Atelier offered the opportunity to 30 young festival managers coming from 17 countries – Belgium, Burkina Faso, Canada, Chile, Ireland, Israel, Italy, Japan, Mexico, Netherlands, Palestine State, Philippines, Senegal, Singapore, South Africa, South Korea, and the United States of America – to spend 7 days together with a group of experienced festival leaders, cultural activists, cross-sector experts and artists to have a global conversation about today’s challenges and the role that festivals, art and culture can play in these.

The event started with the acknowledgement that the Atelier was taking place on unceded Indigenous lands of the Kanien’kehá:ka Nation, recognized as the custodians of the lands and waters on which the event would happen. Tiohtià:ke/Montreal is a place which has long served as a site of meeting and exchange amongst nations. The Festival Academy and Festival TransAmériques recognized the connections with the past, present and future in their relationships with Indigenous and other peoples within the Montreal community. Then, Sedalia Kawennotas Fazio, elder native Kahnawake, welcomed all to the land and opened the event with a traditional opening ceremony. Participants and experts were also welcomed by Mike van Graan, playwright and project manager at Sustaining Theatre and Dance Foundation (STAND), who co-developed the programme and facilitated Atelier Montreal; Inge Ceustermans, general director of The Festival Academy; David Lavoie, executive director of FTA; and Jessie Mill and Martine Dennewald, co-artistic directors of FTA.

The Opening Keynote was delivered by André Dudemaine, guest of honour of the Atelier Montreal. Dudemaine is a cultural leader, co-founder and director of cultural activities at Terres en Vues/Land InSights, from the Innu Nation/Mashteuiatsh Community; and has largely contributed to the influence of the culture of the indigenous peoples of North America. You can re-watch the livestream of this Keynote here.

During the first day of the Atelier, some of the main topics that would be discussed more deeply during the week already appeared, such as first peoples’ perspectives on contemporary challenges to humankind; decolonisation; conflict regions; inequality; climate change and COVID-19; among other. You can watch all livestreamed panels and conversations on our YouTube channel.

“What arts and culture do in this world is not only to bring change in the sense of leading us to a more just or fairer world, but something much slower and away from direct action – which is, reminding to all of us all the time that we are many and that pluralism is the nature of humans. There are no answers that should prevail, no paradigm needs to be seen as the correct one. And when it does, even if I agree with it, it should immediately have a red flag around it because if suddenly we all agree about something, that is a red flag. Consensus is to me a very questionable notion.

(…) Justice, equity, pluralism, decolonisation… these are reference points in our moment. And these question our moment and use art and culture directly as their carriers, and festivals as platforms presenting these ideas and challenging them in our world today. Then the question becomes: What is a festival? Is a festival itself an artistic endeavour? Or is it just a container for artistic endeavours? (…) There has been a paradigm in festivals for a long time for understanding that the job of a festival is to select and highlight excellence. And this notion of excellence needs to be challenged – because today, if we want to be just, pluralistic, openminded, decolonised... it’s not only about selecting excellent works that have these values within them, but also about organising festivals that internalise these notions. And to internalise such notions, the question becomes: how we can be deeply pluralistic and decolonised? And then the answer begins from challenging the idea of excellence.

(...) Everybody is a victim and a perpetrator. Only art can teach us that and can allow us to fall in love with our enemy instead of harming, which is an absolute absurd quest. (...) Festivals and arts cannot change the votes of the mass on the elections, but something much more difficult to change, something deep in the hearts and the ways people see the world around them, something not ‘commerciable’, which is our perception of the other and our perception of the world that is pluralistic.” — Orwa Nyrabia (Netherlands/Syria), Artistic Director of the International Documentary Festival Amsterdam, in the panel “The arts and festivals as meaningful change-makers: Regional perspectives on contemporary global issues and the relevance of festivals to these”

Within the discussions, regional perspectives were also relevant since contexts vary significantly in terms of resources, value systems, political and economic structures. As remarked by mentor Quito Tembe, during the panel "Festivals in a time of existential threat":

“Doing a festival in Africa is dealing with crisis all the time. The question is why we do a festival. (…) To make a festival in constant crises is to shift perspective. We cannot solve all challenges, but we need to focus on the challenge we want to take action in.”

Additionally, between panels and working groups, participants and experts immersed themselves on the cultural programme of the biggest performing arts festival in North America and host of the Atelier Montreal, Festival TransAmériques. It was a unique opportunity to experience international masterpieces of contemporary theatre, dance and film and to attend complementary keynotes, such as Traces - Discours aux Nations Africaines by Étienne Minoungou and Felwine Sarr, Elenit by Euripides Laskaridis or Confession Publique by Mélanie Demers.

A key point was to also experience the festival really closely to its team and board of directors, as participants and experts had the chance to meet many of current and previous FTA team members to discuss about the past, present and future of FTA.

On the last day, emotions surfaced in a round circle of participants and mentors. Everyone gathered to share their key learnings and takeaways from the Atelier. Most of them agreed that the Atelier had been, first and foremost, a place for festival makers to take a step back from their daily tasks and reflect deeply on their practices and the human dimensions of what festivals mean; but also, a safe space for caring, for being present, for really seeing and listening to each other, for being vulnerable, and to slow down, sharing not only success stories but also struggles. A strong international connection between festivals makers, and above all, of human beings.