Review of Atelier Nicosia in partnership with Buffer Fringe Festival 2022 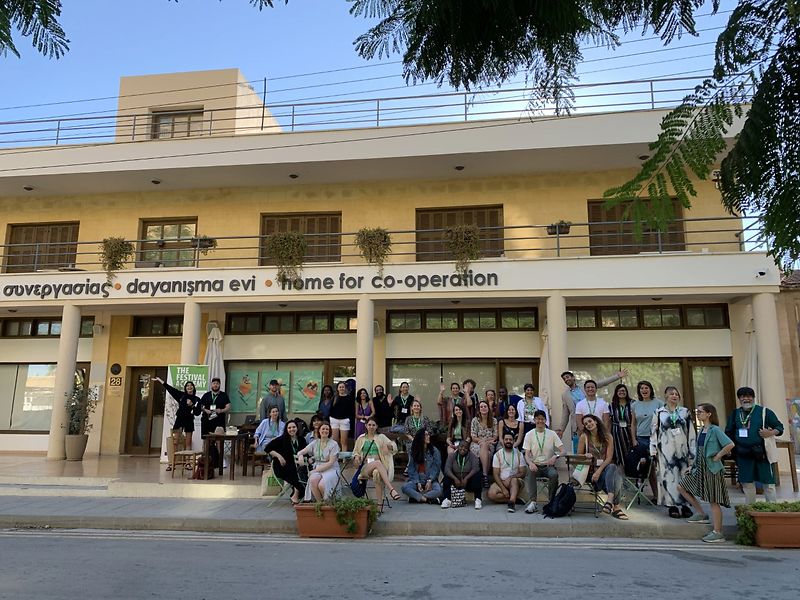 Review of Atelier Nicosia in partnership with Buffer Fringe Festival 2022

The 20th edition of the Atelier for Young Festival Managers took place from 7 – 13 October 2022 in Nicosia, Cyprus in partnership with Home for Cooperation and Buffer Fringe Festival 2022.

The Atelier offered the opportunity to 30 young festival managers to spend 7 days together with a group of experienced festival leaders, cultural activists, cross-sector experts and artists to have a global conversation about today’s challenges regarding festivals and the role of art and culture in conflictual communities and contested spaces. The Atelier offered an opportunity to explore how festivals can become spaces for exploring global issues and reflect upon the role that festivals play within areas marked by conflict.

The opening session of the Atelier took place at Goethe-Institut Cyprus which is placed right in the heart of Cyprus, in Ledra Palace Buffer Zone, in the in-between space of divided capital Nicosia. The Welcoming Ceremony started with singer Nicoletta Demetriou sharing a traditional Cypriot song to tune participants and experts in for the upcoming days of togetherness and to invite them in the surrounding context of the Atelier. The participants were warmly welcomed by Ellada Evangelou, director of Buffer Fringe Festival, Andri Christophides, Manager of the Home for Cooperation Cyprus, Nadia Stylianou, representative of the Ministry of Culture Cyprus, Dr. Gabriele Gauler, director of Goethe-Insitute Cyprus and Maria Efstathiou from Nicosia Municipal Arts Center.

Inge Ceustermans, General Director of The Festival Academy, took her opening speech to express solidarity with the women in Iran. She emphasized the important role of festivals which could offer spaces to imagine alternative realities. “Festival are somehow free spaces, ‘buffer zones’ maybe one can say, safe spaces for uncertainty doubt, stupidity and at times failure.”

The Opening Keynotes contributed thought-provoking statements by international guest speakers online and on site around the topic of art in areas of conflict and social, political, economic and cultural polarisation. The speakers interrogated various claims of festivals e.g. being considered a means to “cure all kinds of social ills”. Michèle Duvivier Pierre-Louis, founder and president of Fondation Connaissance et Liberté and Liberty (FOKAL) and former First Minister and Minister of Justice and Public Security of Haiti, shared her experiences and talked about the power of artistic resilience in conflictual contexts. Mike Van Graan, South African playwright and currently a Richard von Weizsaecker Fellow, examined the claim of culture as a weapon of struggle, by spotlighting South Africa’s festival scene in the context of Western imperialism. Jacob Boehme, multi-disciplinary theatre maker, choreographer and artistic director, founding creative director of Yirramboi Festival, Director First Nations Programs Carriageworks – Narangga and Kaurna Nations/Australia, focussed on his work around the promotion of Aboriginal Culture as a tool of healing and understanding of Indigenous experiences within a situation of cultural incarceration. Darya Bassel, producer and head of industry of Docudays Ukraine, raised the question “Is there is a place for a film festival in times of war?”, and analysed how to maintain sustainable cultural communities in moments of conflict by using existing resources, being creative and by reshaping formats. Orwa Nyrabia, artistic director of International Documentary Festival Amsterdam, spoke about festivals as opportunities of personal and social transformation. You can re-watch the recording of the Opening Keynote event here.

The first day closed with a visit of the cultural programme of Buffer Fringe Festival in which Spanish dance company Encuentro presented their work “Una Guerra Entre Nosotros” on homosexual love in war times and the audio-visual performance “Nostalgia for the Future” by Cypriot Inal Bilsen stimulated the minds and bodies of the audience.

Day two and three took place at Goethe-Institut Cyprus and opened towards a deeper discussion between participants and cross sector experts. Day 2 was dedicated to lay the foundations of the dialogue. International guest speakers challenged participants by tackling various definitions of “peace” and by finding out how to define a “successful festival” in a context of conflict. Atje Drexler, Senior Vice President of international cooperation and understanding at the Robert Bosch Stiftung Germany, started by underlining the importance of storytelling as a great tool of changing our narratives about peace. Brett Pyper, Associate Professor at Wits School of Arts at the University of the Witwatersrand Johannesburg in South Africa, spoke about the personal level of understanding peace and referred to the scalability of festivals, sometimes offering of intimacy. Mira El Mawla, MENA lead program manager at Build Up Lebanon held a provocative speech which she supported with many examples from her practice. She focussed on the systemic level of peace-building and gave a definition o peace as “Not the absence of violent conflicts but a society in which everybody can thrive. Building peace is sometimes seen as a process of erase conflict whereas  to transform conflict we have to engage with its signals.” Lea Perekrests from the Institute for Economics & Peace in Brussels shared findings of the Global Peace Index and showed how data can help to promote peace. Mwandwe Chileshe, Global Policy Lead for Food Security and Agriculture at Global Citizen spoke about how the stage can be used to present big artists but also as a platform to engage policy makers to make commitments. Afterwards, the participants had the opportunity to talk to each other and to the experts in small working groups. Another panel with guest speakers Vigdis Jakobsdottir, Horacio Perez, Christine van Winkle, Leisa Shelton and Diego Aparicio focused on Covid 19 as a crisis situation, the positive innovations that have emerged from the pandemic, and how findings from the crisis period can be applied in the long term practice of festival-making.

Day 3 offered a Panel Discussion with Shahidul Alam, initiator of Chobi Mela International Photography Festival in Bangladesh, Ellada Evangelou, Lea Perekrests, Mira El Mawla and Nadia Sokolenko from the Ukrainian Cultural Institute Kyiv, in-depth discussions in small working groups on forms of conflict, as well as one-on-one sessions with mentors. In 5-minute presentations the participants presented their festivals/projects to their colleagues and gave a further into their specific context and major challenges. In the evening, the participants joined the last day of Buffer Fringe Festival by visiting the cultural programme and exchanging experiences at the festival closing party.

Day 4 took place in Home for Cooperation in the buffer zone; in a Plenary Discussion the participants shared their personal challenges and asked questions concerning the topic of “Sustainability and the Ethics of Festival Funding in a Morally Complex World”. The definition of ‘sustainability’ was reviewed in contexts of conflictual situations with often underfunded cultural sectors. In a workshop by the Organisation for European Programmes and Cultural Relations (OEPCR) on the Creative Europe and Citizens, Equality, Rights and Values (CERV) Programmes of the European Union, the participants were introduced in various funding options.

In the afternoon Colin Stewart - Special Representative of the Secretary-General, Head of UNFICYP and Deputy Special Adviser on Cyprus, Christian Grotnes Halvorsen - Deputy Head of Mission, Royal Norwegian Embassy in Athens, Dr. Gabriele Gauler - Director of Goethe-Institut Cyprus and Maria Efstathiou from Nicosia Municipal Arts Centre took part in a Panel Discussion to speak about their their support mechanisms for arts in contested spaces and in the context of divided Cyprus. In the evening, the film “Crossings” by Theodoris Scrivanos and Diomedes Koufteros was presented and followed by a Q&A.

Day 5 of the Atelier took place in Famagusta in the North of Cyprus. Nurtane Karagil, visual artist, activist and co-founder of community space Magusa Kale Pasajı (Famagusta Castle Arcade) spoke about the young generation of North Cyprus and creative ways of getting involved in peace-building activities in a context of spatial, political and mental division by defining “play as a countertool against burn-out.” Hooman Nassimi, founder of Society in Motion and the New Faces toolkit from the Netherlands, presented tools to promote diversity and inclusion with the focus on groups of forced migration in the broad field of festival-making. Horacio Perez gave practical tips on how networks can be long-term support structures. In the second half of the day, a visit of Varosha Gates, the so-called “ghost town” of Famagusta, challenged the group on different levels. In a guided audio walk the participants listened to the voice of a former resident of the city describing the life in the city before the war while they experienced emptiness, loss and abandonment as consequences of conflict in the space.

Day 6 gave space to Roundtable Discussions around the different topics of The Festival Academys’ toolkits. Working groups presented their pitches for a festival manifesto and shared their working process as a group of festival-makers from different conflict situations. In a session dedicated to the personal reflection of the participants, there was the chance to reflect on the learnings of the Atelier week, to connect and think about how to further engage with each other. In an Open Space session, participants opened towards topics which hadn’t been addressed, or themes already raised that needed amplification.

The last day of the Atelier took place in Theatro Polis and was about giving feedback and sharing the key learnings of the week. The participants, experts, mentors, partners, and team took time and space to formulate what each would now need to go forward and what each could give. The commitment to mutual intentions and the care for each other as a practice of long-term solidarity shaped the shared experience of the group. The need to maintain the deep connection built up within the 7 days of the Atelier and the desire to raise a long-term support network was expressed by everyone. The Atelier not only provided for the participants to open up, listen to and learn from each other but formed concrete ideas for future collaborations.